A few weeks ago, we were invited to share the moment, when Jurie’s implant was switched on for the first time! The doctor at the Hearing Institute in Pretoria explained that Jurie’s ear will pick up sound, but that his brain will have to learn to interpret the sounds.

In October last year, representatives from the Middelburg Old Boys visited the studio to answer the plight of Jurie du Plessis and his mom, Susan.

Jurie was born with hearing difficulty that got worse as he grew older. He was a perfect candidate for cochlear implants, but the price of R380 000,00 was way more than what his mom, Susan could ever afford. The Middelburg Old Boys rallied their community around this family and after much fundraising, hard work and effort, managed to raise the funds. Jurie finally got one cochlear implant on the 27 June 2016! A few weeks ago, we were invited to share the moment, when Jurie’s implant was switched on for the first time!

The doctor at the Hearing Institute in Pretoria explained that Jurie’s ear will pick up sound, but that his brain will have to learn to interpret the sounds – like a new born baby.

With therapy and practice, this process with take around 6 months. Jurie heard a low, medium and high sound … a slap on the table, clapping hands and voices. Even though he heard the sounds, his brain interpreted these as “ping” sounds. This was his first steps to a new world of hearing. 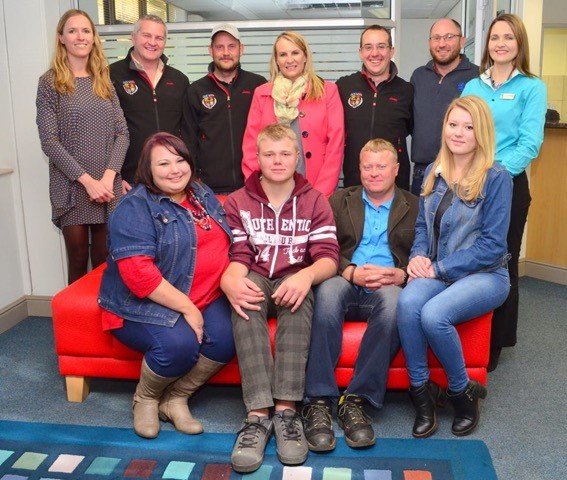 The Cochlear implant – What does it sound like in the beginning?

Here are a few testimonials from patients:

After the initial mapping was done, I listened to speech for the first time.  And it sounded like…GARBAGE.  It was just all a bunch of beeps and chirps.  I drove home that day and decided a nice bottle of single malt Scotch was needed.  I was feeling every emotion from anger, to bewilderment, to sadness.  But to make a long story short, the changes that occurred over the next 6 months were rapid.  After about 2 weeks, the implant started sounding like Sammy the Snake hissing sentences into my head.  Then it changed to Alvin from the Chipmunks.  Next it started to sound like a young Jerry Lewis.  Now it sounds pretty normal and I can hear speech!

The day of switch-on everything was loud and noisy and my husband’s voice sounded like a lady’s voice!

It’s been a year since my switch-on.  Thinking back, I can’t believe what it sounded like in the beginning.  When people spoke all I could hear was this “beep-beep” sound. Now I can hear voices and my life is so much easier!

The switch-on was so strange.  I heard noises, I heard electronic sounds, and it even sounded like music when some people spoke.  I thought – Am I ever going to hear with this thing? I heard mosquitoes buzzing! That’s all I heard with the switch-on!

What frustrated me was, I heard sounds like the car’s indicator and my wall clock ticking, really soft sounds!.  But I couldn’t make out what people were saying.  It was just mumbling and confusing.

Then ‘n “clicked”!, the vibrations I was feeling was actually the sound coming through, but my brain wasn’t registering it as sound yet.  I was in this strange bubble with no sounds, only vibrations.

I don’t know what Mickey Mouse sounds like.  But I think that is what my implant sounded like the first day.  Voices sounded far-off and childlike.  As if little midgets were speaking to me.  Not what I expected at all...

Whispering, rasping, breathy.  That was the initial sound.

The above are quotes of people’s experiences of their switch-on.  They all started off hearing very little, but gradually the sound improved and now they can all hear speech.

The only way of getting through this initial phase is to:

-       Wear the cochlear implant a half an hour a day without your hearing aid and actively listen to people talk during that time.

-       Make a list of new sounds - ask the people living with you to help you identify the new sounds you hear.

-       Attend your speech therapy sessions if “listening” therapy was recommended by the unit.

It may take 6 to 12 months after switch-on before you can hear your maximum potential with the cochlear implant.  However, week by week your hearing will gradually increase.  Unfortunately there is no way of speeding up the process, your nerves and brain is busy rewiring and relearning to process sound.  Physically it takes the nerve and brain a certain amount of time to adapt – this is the 6 to 12 month period that is predicted.

Don’t focus on the following in the beginning:

The above-mentioned abilities are only acquired by users at a much later stage of their adaptation process.  Some people with cochlear implants will never be able to hear over a phone.

Please remember, once you are switched on, you have to be patient, your hearing will improve – but it does take time.

ONE OF THE FIRST REQUESTS FOR JURIE

Firstly, I have been listening to your show as long as I can remember, it’s the best.

My son is 12 years old and are hearing impaired. He has hearing aids but it is not working 100%. We have come to a point

Where he is not coping in school and it is becoming a problem. Now he has been given the opportunity to go for a operation to

Implant a cogliar device. BUT, this operation cost R660 000 . We don’t have a medical and can not afford it.

We are aiming to do the one side and would really appreciate any help. He is my world and there is nothing so bad as not being able to

Please any help or advice would be appreciated.

We are looking at arranging a concert in Middelburg, but that type of thing cost.

GMA: Helping a family do the best for their young son.