This Durban mom never planned to be a mother of five but she counts her lucky stars every day. And to make her journey extra special, she beat the odds of 700 000 – 1 to have twins twice.

Isipingo couple Fatima and Eidris Dildar always wanted a big family and after having their energetic son Zidaan (now 8), they tried again. It took them six years before they were blessed with twins.

Ecstatic to be a mom to two beautiful girls Zoha and Zoya(1), the stork was not done with Fatima. You can imagine her excitement, and surprise, when she found out she was pregnant again with her second set of twins. And to make it even more magical, they are identical.

While it can be chaotic in the house with the babies demanding her time, Fatima says she can never trade being a mother with anything else.

"I manage because I have a supportive husband who is hands on. We had planned our first pregnancy and took some time to conceive again. After six years of trying, I was happy that it was twins but I was also worried about how I was going to manage two newborn babies at the same time, but eventually I managed," she says.

Fatima says she conceived her children naturally and is one in 700 000 women who can have twins twice.

"I was pregnant again and found out we were having twins again. Although I was excited, I also thought about our financial situation, a baby is expensive but we are managing. When I gave birth to the second set of twins, I was prepared because I had experienced having two babies at the same time," she says.

She says it took them two months to be able to identify the second set of twins. 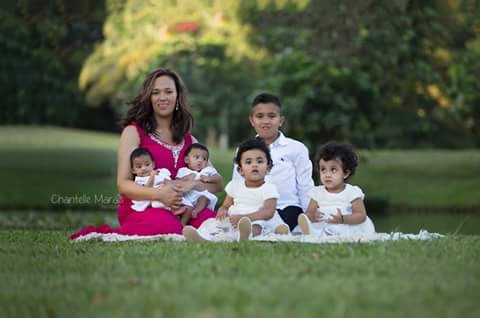 "Because they are identical, it took us time to be able to separate them, even now we get confused," she laughs.

Fatima, who works as a teacher at a primary school, says she has two ‘day parents’ who look after her children when she is at work.

"I fetch them after work and the house can get hectic, but we are used to it and we manage. Zoya became a bit depressed when my babies were born but as parents we make sure to treat them the same and give everyone love," she adds.

And what does a family of five do for fun? What any happy family would do according to Fatima - chill at the park and go for bicycle rides.

Here’s wishing Fatima a happy Mother’s Day and to all of our mom readers.