These five facts about Grammy award winner, Lenny Kravitz, will come as a surprise to many of his fans

.With several hit singles under his belt, and millions of fans around the world, Lenny remains a favourite in the music industry.

But just how well do you know this superstar? Check out these crazy facts about Lenny…

The American Woman singer has had a number of high profile romances, such as his A-list hook-ups with actress Nicole Kidman, model Adriana Lima, and Madonna. But did you know that Lenny dated French singer, Vanessa Paradis? Most people will remember Vanessa as Johnny Depp’s ex-fiance, and mother of his two children, Lily-Rose and Jack. 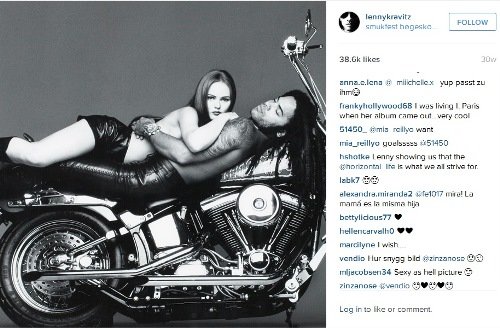 He has an organic farm in Brazil

The singer and songwriter owns an organic farm, located four hours outside of Rio de Janeiro. The former vegetarian is a big fan of healthy eating, and particularly loves organic products.

He is BFFs with Mariah Carey

Mariah Carey and Lenny Kravitz became friends before they hit the big time. The pair apparently met in New York when they were both struggling artists. “We remain good friends to this day,” he told Us Magazine.

. @AmericanIdol What's going on? need the info!! What about this combo? : ) if we could ever get him to do it! pic.twitter.com/qywveJHd

Lenny Kravitz is the spitting image of his daughter’s boyfriend

That awkward moment when your boyfriend looks like your dad’s twin! Lenny’s daughter, Zoe, is dating, Twin Shadow, who before he dyed his hair blonde, looked a lot like her dad. And in an even stranger twist, he is also a singer, producer, composer, and writer.

Celebrate the best of the ‘High School Hits’ from the last 3 decades with the Arrie Nel Pharmacy Group and Jacaranda FM. Stand a chance to win R2 000 cash, Saturday and Sunday (6-9am and 12noon – 4pm).  Click here to enter.