PRAVIN GORDHAN SAYS HAWKS HARASMENT MUST STOP: The Hawks - and those who instruct them - have no regard for the economic and social welfare of millions of South Africans, Finance Minister Pravin Gordhan said on Sunday. "I was very surprised to read the misleading headlines and content of the articles in some of the Independent newspapers," he said in a statement. According to media reports on Sunday, the Hawks had issued a second letter to Gordhan giving him a Monday 4pm deadline to answer 27 questions about an investigation into the so-called SA Revenue Service "rogue unit". Gordhan was also reportedly criticised by Hawks boss Berning Ntlemeza for not meeting the initial deadline a few days before his budget speech in Parliament. Pieter van der Merwe reports.

HAWKS INVESTIGATION INTO SENZO MEYIWA CASE CONTINUES: The Hawks are adamant that progress is being made in the Senzo Meyiwa murder investigation. Hawks spokesman, Hangwani Mulaudzi says they went back to the scene of the murder, along with members of a special task team.

PIKITUP WORKERS STILL BEING DISMISSED: Pikitup on Sunday said it was continuing to issue pre-dismissal notices to striking workers affiliated to the SA Municipal Workers' Union (Samwu), adding that it hoped normal services would resume on Monday. The Johannesburg waste management utility also welcomed the call by Samwu's national office for its members to return to work. "This is as Pikitup continues issuing pre-dismissal notices as a result of the workers' failure to return to work on Thursday, 10 March. The workers also failed to heed the call by their own union to return to work on Friday, 11 March," Pikitup said in a statement.

34 KILLED IN SUICIDE BOMB ATTACK: A suicide car bomb ripped through a busy square in central Ankara on Sunday, killing at least 34 people and wounding 125, officials said, the latest in a spate of deadly attacks to hit Turkey. The explosion at 6:45 pm (1645 GMT) struck a bus stop near Kizilay square, a bustling commercial area and local transport hub, reducing buses to charred husks and damaging nearby shops. Officials said the blast was caused by a vehicle packed with explosives, which the interior minister said was driven by one or two attackers who had deliberately targeted the bus stop.

MRS WORLD HEADING HOME: Finally the brand new Mrs World, Candice Abrahams arrives back in South African tomorrow morning. The mother, wife and model was crowned in China at the weekend. Abrahams recorded a special message to South Africans in the meantime. 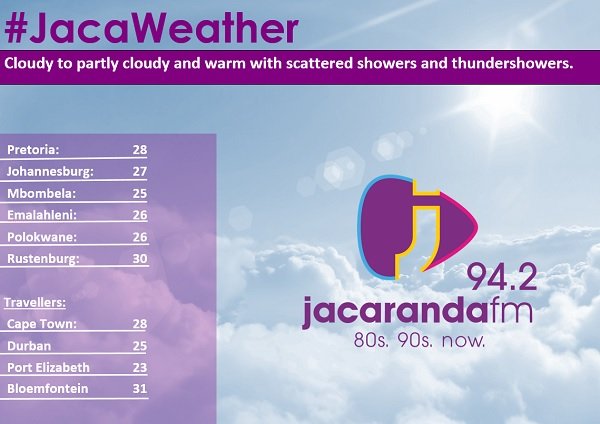