ROADS OPEN IN ZANDSPRUIT: Police confirmed on Thursday morning that roads in and around the Zandspruit area were open for traffic after a service delivery protests broke out there on Wednesday. Thousands of Zandspruit residents took to the streets and handed over a memorandum at the Honeydew Police station. "Give us service, that's what we need. No fighting, nothing. We just want power...We vote for you, give us power. We are going to pay, that's it. No fighting, but they don't listen to us. According to me, I don't see that democracy," one resident said. Our reporter, Maryke Vermaak joined members of that community as they protested for better services.

WATCH #Zandspruit Many people still outside the police station.@MarykeVermaak pic.twitter.com/J04BA9NUKP

GAUTENG EDUCATION'S ONLINE APPLICATIONS STILL AN ISSUE: The Gauteng Education Department said it will add more capacity to its new online admissions system on Thursday. The system went live again on Tuesday afternoon after several delays due to overloading. The department's Oupa Bodibe said they have been able to process 200 000 applications in the first 24 hours of the system being live. He said the biggest headache still, is when several applications are submitted for the same child.

NO PAROLE FOR JANUSZ WALUS, SAYS SACP: The South African Communist Party maintained that Chris Hani's killer, Janusz Walus failed to prove exceptional circumstances and therefore should not be released on parole. Walus has asked the High Court in Pretoria to be released immediately on parole pending the outcome of a petition lodged by Justice Minister Michael Masutha to the Supreme Court of Appeal. Walus' appeal was under consideration, but the SACP's Alex Mashilo said he should remain behind bars.

COMAIR STRIKE IS OVER: Some 400 Comair workers will be back to work this morning after a wage deal was reached with workers affiliated to the union UASA. The CCMA had to intervene after wage talks deadlocked, last week. The union's Jannem Goussard has more.

GAUTRAIN SERVICES RESTORED: Gautrain services between Hatfield and Pretoria stations have been restored. The route had to be closed on Wednesday afternoon after a truck crashed through a concrete barrier and ended up on the track. The driver was injured and his passenger died at the scene. The cause of the crash was still being investigated. The Gautrain's Kesagee Nayager said passengers were transported by Gautrain buses yesterday.

HAPPY BIRTHDAY QUEEN ELIZABETH: Britain celebrates Queen Elizabeth II's 90th birthday on Thursday, with her eldest son Prince Charles paying tribute in a special radio broadcast and Prime Minister David Cameron leading a parliamentary homage. The sovereign, who last year overtook her great-great grandmother queen Victoria to become Britain's longest-reigning monarch, is to mark the day in Windsor Castle with official engagements and a dinner with the royal family. The excitement was visible in the small town of Windsor, west of London, with special bunting put up in the streets and local shops selling souvenir tea and cakes as well-wishers gathered to celebrate an historic day. 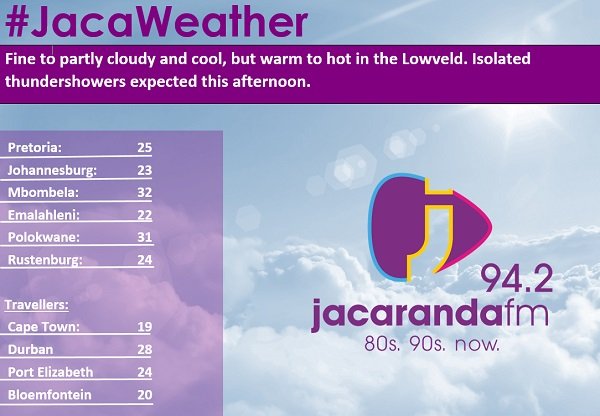