DANISH NATIONAL IN COURT AFTER GENETALS WERE DISCOVERED IN HIS FREEZER: Police in the Free State have appealed to woman to come forward, who possibly fell victim to a Danish national - who appeared in court yesterday - after police last week made a gruesome discovery in the freezer of his Bloemfontein house. Police believe the man lured women from especially neighbouring Lesotho and performed illegal operations on them. Police found 21 pieces of female genitalia, as well as medical equipment and medication in the house. Police believe the 58-year-old gun shop owner, is wanted in Denmark for illegal dealing in firearms.

ANC YET TO MEET WITH UNIONS OVER ANAs: ANC secretary general, Gwede Mantashe says they will soon meet with education unions over their resistance to the Annual National Assessments.  Five education unions yesterday stood firm in their resistance to the tests being written in primary schools from the 1st to the 4th of December. They did however also state that they would not disrupt learning and schooling. Mantashe however says the matter is too important not to discuss.

ANC WILL NOT TOLERATE FACTIONALISM: The ANC says it will not tolerate factionalism within the party. Secretary General, Gwede Mantashe briefed media yesterday post the party's NEC meeting over the weekend. Mantashe stated that the ANC would deal with factionalism through a review of its internal electoral system, which has been commissioned.

PHARREL WILLIAMS GETS A NOT-SO-WARM WELCOME: The concert in Cape Town last night, by Grammy winner, Pharrell Williams continued without incident, after just under a thousand pro-Palestinian demonstrators, picketed outside the venue.  Supporters of the Boycott, Divestment and Sanctions or BDS campaign were protesting against the singer's partnership with retail group Woolworths, over its imports from Israel. Organiser, Kwara Kekana says they are satisfied with last night's demonstration. Williams is set to perform a second concert at the Dome in Joburg on Thursday.

GAUTENG RAILWAY UNDER THE SPOTLIGHT: The South African Rail network will get a much needed face-lift. Gauteng MEC for Transport, Ismail Vadi, says the network has been neglected over the years, but that is about to the change. He was speaking at the launch of the Green Paper of the National Rail Policy, which is currently underway in Joburg. He says the government's commitment to invest heavily in this network over the next two decades - was the important first step ... after decades of neglect.

WORLD RHINO DAY: The World Wildlife Fund has released footage of a critically endangered Javan rhino and calf captured on a camera trap in Indonesia. Javan rhinos are critically endangered species that exist in only this one protected area and this incredible footage injects much-needed hope and a new urgency to conservation efforts on the ground.

A LETTER TO OUR RHINO: Wildlife television presenter, Bonné de Bod wrote a letter to our rhino while filming an Afrikaans documentary film, Stroop in South Africa. Here's the letter:

I hope and pray for your safety on this day when the world celebrates you.

I've been following your footsteps closely for the past 18-months and I've had many ups and downs over this period. Last week was particularly difficult for me to once again witness what my species is capable of. One of you survived a brutal attack and to say a front horn was removed doesn't do justice to the violation that was committed. No... gouged and pulled from your face while you were drugged and it's hard to believe it could get worse, but it did... your four-month old calf witnessed this and both of you are now on the road to recovery. Of course my words of sorry and forgiveness are empty...

I've spent days on end with the people at the frontlines of this war... and yes it is a war, let's not fool ourselves. Hard to believe, but there are some who don't like to call it that. I know it must be hard for you to trust any human and I don't blame you, but there are people out there who deeply care for you and are trying their best to save you. But sadly on my journey, I've also seen first-hand how you've been let down.

How did we get here? Not easy to answer in a country compromised by corruption, poverty and greed. But the problem goes much further; it travels across the ocean, and this is my reason for visiting Vietnam at the end of the month. I will try my best to understand that world and hopefully have an answer for you.

The news channels are currently dominated by the migrant crisis in Europe... I guess the meaning of the phrase 'migrant crisis' can be hard to grasp, until you see the footage on television. I hope that when 'STROOP' is released showing the story of you, of your species brutally mutilated and many many of you hacked to death, well maybe then humanity will grasp the true meaning of this war. They say nearly 20-million people have been forced to flee their home countries. I wonder if you would do the same if you could? If you would leave South Africa and move to Botswana or even further away, to Australia like many say you should. Or would you choose to stay?

I come across many people who feel despondent and don't know how to help you. I continue to tell them that we need to keep sharing your stories until your plight becomes part of mainstream culture. I want them to remove the excuse, 'I didn't know' or 'I couldn't do anything'. Ordinary people aren't aware of the extraordinary power they have inside them to start movements which ultimately make the world a better place. And I refuse to accept a world without your species in it. No painting, photograph or object of any kind will ever replace you, the living, breathing animal. Know that I will not give up, until you no longer have to graze in fear. 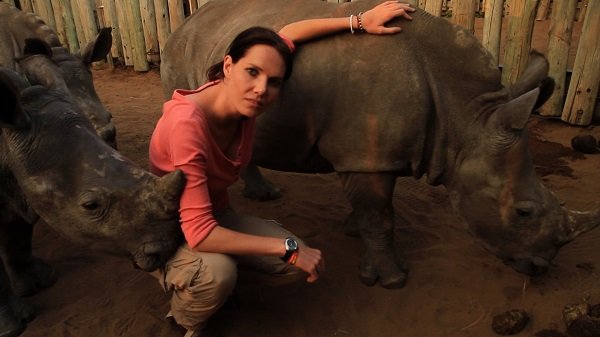