FREEDOM DAY CELEBRATED ACROSS SOUTH AFRICA: Government has thanked all South Africans who participated in Freedom Day celebrations saying it demonstrated active citizenship and patriotism. Premier David Makhura addressed the Gauteng leg of freedom day celebrations at the Union Buildings. He asked South Africans to come together to bridge the gap between rich and poor and also had a strong message against racism. Makhura encouraged young South Africans to defend Democracy and the Constitution. President Jacob Zuma addressed the government's main celebration in Giyani in Limpopo. Our reporter, Maidi Monareng was there.

JACOB ZUMA TAKES A SWIPE AT JULIUS MALEMA: Speaking in Giyani in Limpopo, President Jacob Zuma took a swipe at the leader of the EFF-leader, Julius Malema. President Zuma also encouraged people to ignore calls to take up arms.

HAWKS INVESTIGATING JULIUS MALEMA: South Africa's specialised crime-fighting unit, the Hawks, are set to investigate criminal charges against Economic Freedom Fighters leader Julius Malema, Police Minister Nathi Nhleko said on Tuesday. Briefing journalists in Parliament, along with police top brass, Nhleko said Malema's comment on Al Jazeera at the weekend that the South African government would be removed by the "barrel of a gun" by the opposition once its patience had run out was "reckless", "inflammatory", and had the potential of "plunging the country into chaos".

FUEL AND FOOD PRICES ON THE RISE: Another petrol price increase of around 18 cents a litre is expected to be announced next week. This in conjunction with a sharp increase in food prices could have a devastating effect on consumers. The price of red meat is expected to spike sharply by between 50 and 60% and Debt Rescue's Neil Roets says this is bad news.

BIGGEST MALL IN AFRICA: Developed on a scale beyond anything the country has known by leading South African property developer and investor Atterbury, the iconic new Mall of Africa is the largest shopping centre to date. The mall was constructed at a cost of R5 billion and boast a 130,000 square meter shopping centre that set a new benchmark for shopping centres on the continent.

RESCUED LIONS TO BE TRANSPORTED BACK TO SOUTH AFRICA: Thirty three lions, rescued from circuses in Peru and Colombia are heading back to South Africa. The lions were expected to depart for South Africa on Friday to live out their days at the Emoya Big Cat Sanctuary in Limpopo.

CHARLIZE THERON REMEMBERS MADIBA: Hollywood actress, Charlize Theron remembered her home country on the 27th of April, as South Africa celebrated 22 years of democracy. The A-lister, who was born and raised in Benoni, on the East Rand, posted a photo of her and the late Nelson Mandela on social media, paying tribute to her native country. Charlize met the world renowned statesman after becoming the first South African actress to win an Oscar for her role as Aileen Wuornos in Monster.

April 27 1994 was the first post-apartheid election where all South Africans were free to vote. Freedom Day. "Wherever South Africans are across the globe, our hearts beat as one, as we renew our common loyalty to our country and our commitment to its future.” - Nelson Mandela #freedomday 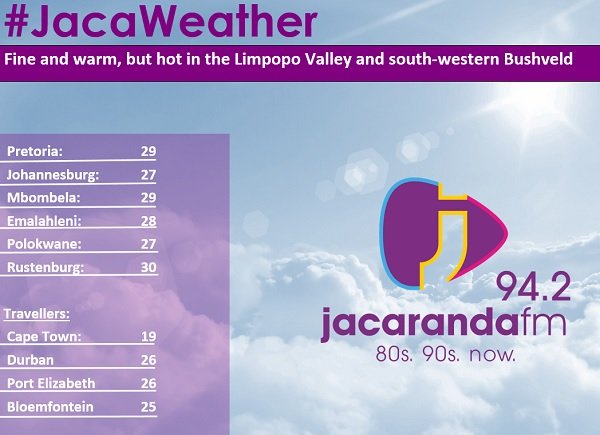