SPY TAPE RULING EXPECTED: A court will rule on Friday on a bid to have more than 700 corruption charges reinstated against President Jacob Zuma, piling further pressure on the embattled leader. The charges, relating to a multi-billion dollar arms deal, were dropped by the chief state prosecutor in 2009 -- clearing the way for Zuma to be elected president later that year. Judgement in the case will be delivered in the Pretoria High Court. The main opposition party, the Democratic Alliance (DA), maintains that the prosecutor's decision to drop the charges was wrong. "We contend that the decision taken by the then acting national director of public prosecutions, Mokotedi Mpshe, was irrational, unreasonable and made with an ulterior political motive," the DA said Thursday.

DA REACTS TO PICTURE OF SUPPORTERS BEING TRANSPORTED ON A CATTLE TRUCK: The DA reacted to a picture that was doing the rounds on social media showing people, dressed in what looks like DA T-shirts, being "loaded" on a cattle truck. The party was trying to establish the story behind the pic - which came to their attention after an outcry on social media. Spokesperson, Phumzile Van Damme said disciplinary action will be taken if party volunteers were indeed treated like the pic suggests.

ALLEGED PANDA BOMBER SHOT ON LIVE TV: A man who threatened to blow up a local Baltimore TV station Thursday dressed head-to-toe in a bear costume was carrying chocolate bars made to resemble an explosive device, police said. The 25-year-old was in "serious but stable condition" at a local hospital after police shot him several times when he emerged from the building and walked toward them, Baltimore police spokesman T.J. Smith told reporters during a news conference. Police used a robot to disarm the man as he lay injured on the ground after being shot, which is when they discovered that his bombs were fake.

PRESIDENT HANDS OUT NATIONAL ORDERS: It was a special day for 32 South Africans and friends of the country on Thursday. They received the highest honour from President Jacob Zuma when he bestowed national orders them. The recipients included ANC stalwart Winnie Madikizela-Mandela and former presidency spokesman Mac Maharaj. Slindelo Masikane was there.

SOME CLARITY FOR VUWANI RESIDENTS: Residents of Vuwani in Limpopo expected some clarity over the decision to incorporate their municipality into Malamulele. The High Court in Limpopo was expected to rule on the matter on Friday - just three months before the local government elections. Maidi Monareng reports.

COLD FRONT MOVING IN: The South African Weather Service warned that a cold front would hit the Jacaranda FM broadcast area later on Friday. According to weather forecaster, Dipuo Tawana said that temperatures between 5'C and 20'C are expected. 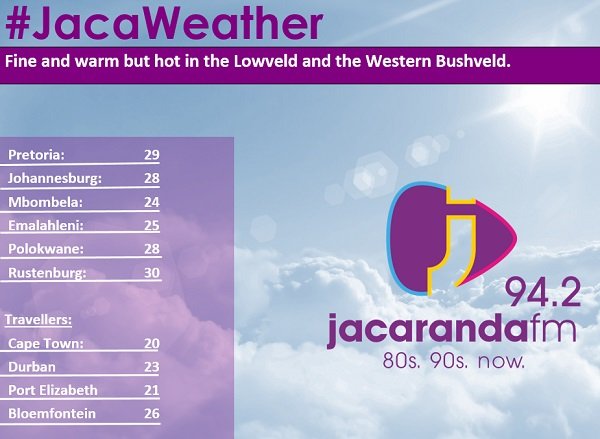