UNIVERSITIES OPEN FOR ACADEMIC ACTIVITIES: It was the first day of school after the Easter break for State Schools and Wits University was also ready to open its doors on Tuesday morning. This followed a violent protest by students and workers who were calling for free education for all as well as an end to outsourcing. The University of the Witwatersrand's Shirona Patel confirmed that lectures were disrupted and seats in a lecture hall set alight. Some lectures at the University of the Witwatersrand (Wits) campus in Braamfontein were suspended on Monday after students and workers embarked on protest action. Wits spokesperson Shirona Patel said a group consisting of students, some individuals from off campus as well as workers from a private contractor on campus were demanding free education for all and for an end to outsourcing. Students have spoken out, saying they were unhappy about another disruption.

TUT CAMPUSSES SET TO RE-OPEN: The Tshwane University of Technology's Soshanguve North and South campuses was also set to reopen on Tuesday. The facilities in Soshanguve were shut down after continuous protests and violence.

TAXI ROLLS IN ALBERTON: Two people were killed and at least nine others injured when a taxi driver lost control on the R59 / N12 in the Alberton area on Tuesday morning. ER24 paramedics and other services arrived on the scene and found the taxi had rolled multiple times ultimately landing on the embankment. Two patients were found several metres away from the accident scene and had succumbed to their injuries.

ANC MEETS AHEAD OF PARLIAMENTARY DEBATE: The ANC's National Working Committee met for several hours on Monday night amid growing pressure for President Jacob Zuma to step down. The meeting was held in Cape Town where parliament's national assembly would on Tuesday debate the DA's motion for impeachment processes against the president. Pieter van der Merwe reports.

SANDF SLAMS UNION FOR COUP COMMENTS: The South African National Defence Force slammed one if its unions for criticizing the president and urging him to step down. The SANDF's brigadier Xolani Mabanga said SANDU's comments are unacceptable as the armed forces are a non-political entity of the state.

TSWHANE MEYOR SAYS ANC IS IN UNFAMILIAR TERRITORY: Tshwane mayor, Kgosientso Ramokgopa says the ANC finds itself in unfamiliar territory with the Zuma saga. Those who called for his head could not compare it to the Thabo Mbeki affair. Ramokgopa explained the complexities the party was faced with.

SPOTLIGHT ON EARLY CHILDHOOD DEVELOPMENT: Gauteng's Department of Social Development has reacted to an incident in Bramley, in Johannesburg, where a toddler drowned in a swimming pool at an illegal crèche. According to the Department's Mbangwa Xaba the crèche in Bramley was shut down the toddler drowned in a pool filled with rubbish, rocks and bricks. The department has identified that there was a need for centres of early childhood development as the apartheid government did not cater for early childhood development centres in townships. 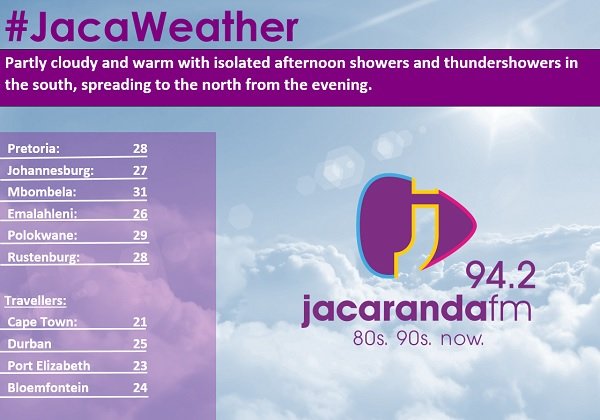