UCT acting SRC head suspended over alleged homophobia
The University of Cape Town's SRC has suspended its external Vice President Zizipho Pae after she updated a Facebook status believed to be homophobic.

Pae updated on her personal Facebook account "We are institutionalising and normalising sin! May God have mercy on us," two days after the United States Supreme Court legalised same sex marriages in 55 states.


Pae's statement sparked an uproar on Facebook with comments from DA National Spokesperson Marius Redelinghuys saying "Yes we are institutionalising all of it. We even took away the god given right to own slaves" 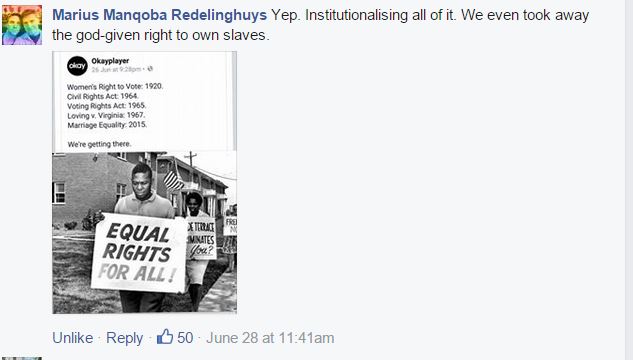 More were outraged at the fact that she updated the status while she was appointed acting President of the SRC.

The SRC issued a statement distancing themselves from Pae's comments and have launched an investigation started with a disciplinary process.

Current acting SRC President appointed to replace Pae, Oyama Botha, says Pae was sent an email on June 29 regarding a summons to give an account of her rationale as to her intentions and meaning of her Facebook status and to provide any thoughts she may have after reflecting on the implications of the status.

Botha also says in a statement the email to Pae included that she had to entail whether she will be issuing an apology or retraction and was notified that if she failed to respond to the email with 24 hours the SRC Vice President would take remedial action.