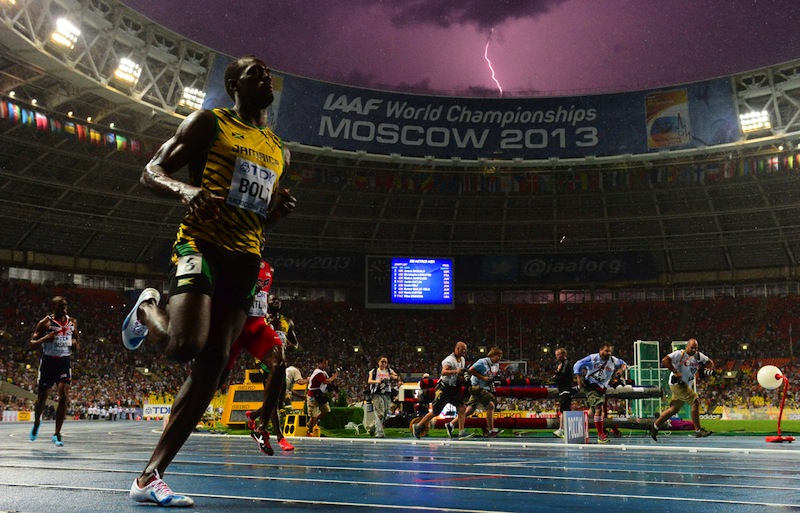 Photo: Oliver Morin/AFP
That's exactly the shot snapped by AFP photographer Olivier Morin on Sunday night as the Jamaican athlete won his 100-metres final at the 2013 IAAF World Championships in Moscow.
Photographers, sports fans and commentators were slack-jawed after seeing the image today, with one Irish article calling it “the coolest picture of the decade”.
Morin, 47, who's based in AFP's Milan bureau, shrugged off his role in capturing the image, saying he can only claim “one per cent” credit.
“Let's be honest: the only things I was able to control were the framing of the shot and when to hit the remote-controlled trigger,” he wrote in an AFP blog posting.
“The flash of lightning - well, of course that can't be planned.”
Morin, an AFP veteran of 23 years, said he'd set up five remote-controlled cameras along the edge of the track, all of them focused on Bolt's lane. He envisioned getting a photo of the winner with his hands in the air.
“It's of course the lightning that makes the photo, because we're talking about Usain Bolt here. Without the flash in the sky, it wouldn't really be anything that special. I knew it was a good shot, but I didn't anticipate the amount of reaction it would get,” Morin said.
The image was massively shared on social media sites, and on Twitter was tweeted and retweeted thousands of times.
Britain's The Guardian newspaper called it “an image that is almost certain never to be repeated”, the Huffington Post said the photo was “astounding”, and the Washington Post designated it the picture of the day. Irish sports site The Score went further - calling it the “coolest picture of the decade.”
Bolt clocked a season's best 9.77 seconds in heavy rain at the Luzhniki Stadium, with American Justin Gatlin claiming silver and Nesta Carter, also of Jamaica, taking bronze.