Shaler records the action of a turbulent flow of water
Of course, the fact that water may have been plentiful in Mars' distant past is not the same as saying the planet also hosted life. It's just a prerequisite, certainly as we understand it on Earth.
Other "must haves" include a source of energy to drive the metabolism of organisms, and a source of carbon to build their cellular structures.
All life on Earth trades off a source of organic molecules, such as amino acids. Curiosity has yet to see this kind availability signal at Gale, but that is not really surprising.
Take a trip to Mars 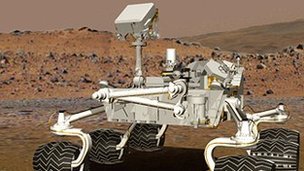 Mars Rover
Explore the Red Planet with Nasa's robot
Even in Earth rocks where we know sediments have been laid down in proximity to biology, we still frequently find no organic traces. The evidence doesn't preserve well and in the particularly harsh surroundings of modern-day Mars, this is likely to be doubly so.
And then, of course, there are plenty of non-biological processes that can produce organics, so it wouldn't be an "A equals B" situation even if Curiosity were to make such an identification.
Nonetheless, there is hope that the rover can turn up some interesting organic chemistry at Mt Sharp.
But it's going to take a while to get to the mountain. The preferred investigation site is some 8km (five miles) distant - a long way for a robot that moves at most about 100m a day.
The wait, however, will certainly be worth it. The tall succession of rocks should open the book on the geological evolution of Mars. Through the many layers at the base of the mountain, researchers hope to see the record of different water events come and go, through perhaps hundreds of millions of years. And pictures - they'll blow your mind, says Prof Dawn Sumner, a mission scientist from the University of California at Davis, US.
Mt Sharp
The long sequence of rocks at Mt Sharp will help fill out the story of the geological evolution of the planet
"It's going to be like walking through a national park, like the canyon lands of the US or the Bungle Bungle in Australia; it's just completely different from anywhere we've been on Mars so far.
"Even just looking at the images we have taken from kilometres away, you can see that it just looks amazing.
"The slopes on the sides of those hills are so steep they count as cliffs, and there'll be layers in them that will probably be different colours and textures. It will blow people away,"
The best is yet to come.
- BBC News