The Springboks will open their Rugby World Cup 2015 campaign against the top qualifier from Asia at Brighton Community Stadium in the southern coastal city of Brighton, the International Rugby Board announced on Thursday.

The announcement of the pool draw was made at a function at Twickenham in London earlier on Thursday. The Springboks will play their pool matches in Brighton, Birmingham, Newcastle and London. South Africa are in Pool B alongside Scotland, Samoa, Asia 1 and Americas 2.

There are 871 days from today until the Springboks start their quest to win the Webb Ellis Cup for an unprecedented third time in England in 2015, on Saturday 19 September, at the home of Brighton & Hove Albion Football Club.

Following their opening match, the Springboks will move north, to the central English city of Birmingham, where they will face Samoa at Villa Park, home of the English Premiership soccer team Aston Villa, on Saturday, 26 September.

The Springboks’ third match, against Scotland on Saturday, 3 October, is scheduled for the historic St James’ Park in Newcastle in the far north east of England, where Newcastle United play their Premiership home matches.

For their final pool match, the Springboks will move from St James’ Park, in use since 1880, to the brand new Olympic Stadium in London, built specifically for the Olympic Games last year. This match, against the second qualifier from the Americas, will take place on Wednesday, 7 October.

“The Springboks have a proud record at Rugby World Cups and I’m confident they will be there again at the business end of the tournament in 2015, but we have to ensure our planning is perfect for this tournament if we are going to do our country proud over in England.” said SARU CEO Jurie Roux.

“It’s great to know this far in advance what our schedule for the pool matches will look like, as it provides our logistics team with ample opportunity to ensure the Springboks stay in the best hotels, get the best training facilities and come up with a travel schedule what will benefit the team..

Springbok coach Heyneke Meyer said: “Playing in parts of the UK that we normally don’t see, such as Brighton, Birmingham and Newcastle, is exciting.

“In the end however, the games still have to be won and it doesn’t matter where we play, we have to ensure we get more points on the scoreboard than our opponents.

“The Rugby World Cup is still more than two years away and a lot of rugby will be played between now and then, but we now have an opportunity to put all our planning into place for that tournament.”

The four quarter-finals are scheduled for Twickenham in London and the Millennium Stadium in Cardiff on the weekend of 17/18 October. Both semi-finals will be hosted by Twickenham (24/25 October), while the third-place playoff will take place on 30 October at the Olympic Stadium.

The Rugby World Cup final will be at Twickenham on Saturday, 31 October 2015.

The Springboks’ RWC 2015 Pool B schedule is: 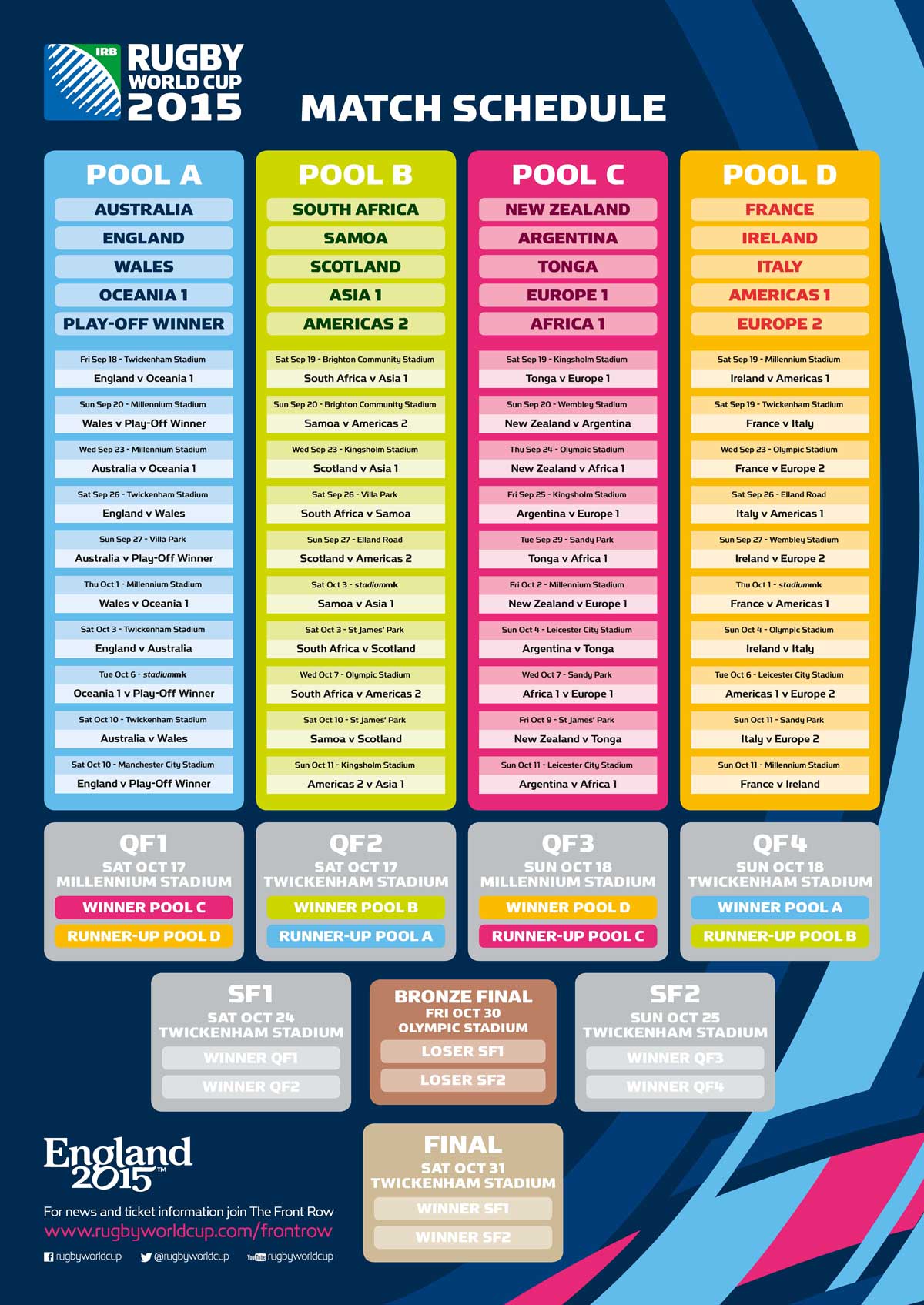